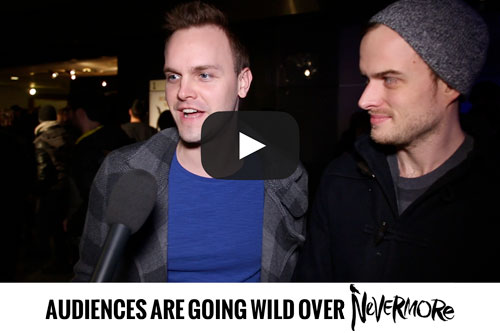 A literary rock star in his day, Poe struggled with tragedy and addiction, poverty and loss, yet produced some of the world’s most original, visionary and enduring literature before dying in unexplained circumstances at the age of 40. At once gorgeous and grotesque, Nevermore blurs the line between fact and fiction, exploring the events that shaped Poe’s character and career and giving powerful expression to Poe’s words “all that we see or seem is but a dream within a dream.”

Originally produced by Catalyst Theatre of Edmonton, Canada in 2009 to commemorate the bicentennial of Poe’s birth (January 19, 1809), Nevermore has toured extensively, playing acclaimed engagements throughout Canada and in London at the prestigious Barbican Center. The show’s engagement in 2010 at New Victory Theatre was greeted by wildly enthusiastic audiences and sold-out houses. Since its first New York appearance in 2010, Nevermore been expanded and revised, with several new songs added and structural changes made to the original script.

Nevermore is written, composed, and directed by Catalyst Theatre’s Artistic Director, Jonathan Christenson. The physical world of Nevermore – including sets, costumes, and lighting – is designed by Bretta Gerecke. The production features choreography by Laura Krewski, sound design by Wade Staples, and voice, speech and text direction by Betty Moulton.

You have Successfully Subscribed!